RFC2289 defines a one-time password system based on a chain of hashes. It is based on S/Key released as RFC1760 by Bellcore, and has found it’s way into many Unix-like distributions. It is still recommended in the FreeBSD security guide

Let’s start with a quick description of the S/Key OTP protocol.

An OTP Client does this:

What this basically means is that the seed and passphrase are hashed with a one-way cryptographic hash function to produce sequence zero, which is then hashed a number of times - this number is called the sequence. When you initialise your otp chain (or change passwords), you give a copy of sequence 500 (for example - it can be any positive number) to the server. When you want to login for the first time after that you send sequence 499.

An OTP Server does this:

The function H() is defined as being MD4, MD5 or SHA-1, but folded into 64 bits with the XOR operation.

Normally when hashing a password, a salt is used to increase the storage requirements for precomputed hash values and hides from an attacker that multiple users have chosen the same password.

While S/Key includes a salt in the first round (sequence zero) which strengthens it against dictionary attacks and prevents the chain from repeating should somebody reuse a password, it doesn’t include the seed in each round. Combined with the somewhat small 64-bit hash functions this opens S/Key up to a practical time-space trade-off.

Calculating 264 key/value pairs would still take longer than the time between logins for most users on a system. Storing 264 key/value pairs (eg. an ordered table of 264 values) is still fairly large, even by today’s standards. But with this OTP scheme there’s a way to easily compress the storage for a pre-computed attack.

Say you were happy to store 248 64-bit key/value pairs on disk, you could store each OTP sequence 216 of an arbitrary value. This would cover most of the 64-bit space (you will lose some coverage due to collisions and overlapping sequences. Shorter sequences mean less collisions). Assuming 32 bytes per hash (including indexing overhead), that would require 35TB of storage, plus enough CPU/GPU time to once-off calculate 264 values. Storing less will result in having a smaller probability of breaking the intercepted OTP - you’ll just need to intercept more to get a break.

When you intercept an OTP, check if it is in the table. If so, you simply need to hash your original value 216-1 times (sticking with our example numbers from before) and you have an OTP that will work. In fact at that point you could probably log in 65535 times if the server isn’t keeping an eye on the sequence number.

If you didn’t find the hash on your first try then not all is lost - simply hash the intercepted OTP and check if that’s in the table. If so then you hash the value in your table 216-2 times. You can repeat this process up to 216-1 times before giving up. 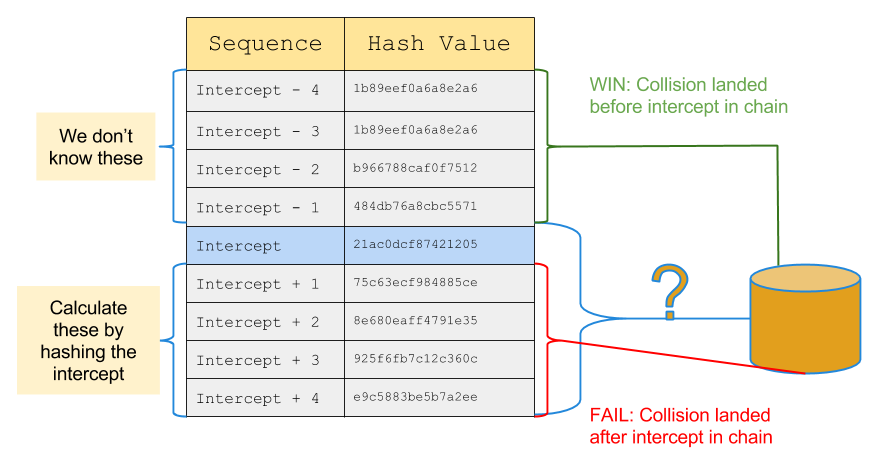 You can trade off time vs space almost arbitrarily with this attack, although it still assumes that you’re willing to pre-compute 264 values. Keep in mind that storing excessively large chains will result in convergence. I found 216 is a good value, and 228 is extremely convergent.

I’ve added some code to GitHub for anyone wishing to try out this technique. Please let me know how you go.

Loopy Contruction
OTPs chains are similar to the OFB block-cipher mode and shares it's interesting failure modes. There may be some chains of OTPs which contain a loop - the extreme example being one that hashes to itself. In this case, an attacker could use your OTP enough times that it resets itself and you'd never know somebody had stolen your credentials. I haven't found an example of this, but it could exist in theory.
Extended Responses
The init-hex and init-words OTP extended responses (RFC2243) are evil. If somebody did break your OTP the extended responses could be used to reset your OTP back to where it was, and unless somebody's closely monitoring the log files you'd probably never notice it. If you must support these make sure that you do it over a secure connection and you notify out-of-band that the init sequence was used (eg. via email or SMS).
Easy Fix
The fix for the OTP protocol would be to include the seed and sequence in each round. A larger hash and using a KDF for sequence zero wouldn't hurt either.
Client-only stretching
You could imitate a KDF by picking an insanely high sequence number. This would only impose extra stress on the client (and a dictionary attacker) - the server wouldn't notice

Examination of a break:

Included below is some code that examines a collision I found using this technique: